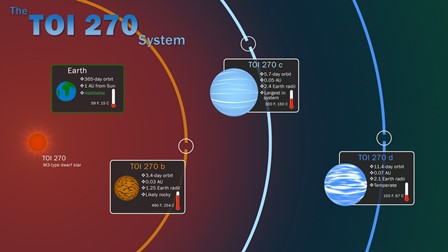 NASA's Transiting Exoplanet Survey Satellite (TESS) has discovered three new smallest and nearest exoplanets named TOI 270. TOI 270 is about 73 light years away from Earth, and is located in the constellation Pictor.

Nasa’s Exoplanet Survey Satellite (TESS) was launched into space in 2018 and it is scanning the universe for stars and planets that could support alien life.

All of the planets in our solar system orbit around the Sun. Planets that orbit around other stars are called exoplanets.